I am serving as your Area 60 (Western Pennsylvania) Corrections Committee Coordinator.

The Pre-release Contact Program, formerly known as "Bridging the Gap" connects the A.A. Member being released from prison with the outside Alcoholics Anonymous community.

When a soon to be released A.A. Inmate writes the General Service Office in New York, they are directed to us through the pre-release contact program form. We in turn send a letter of recognition to the inside member letting him or her know we have received their request. We then match the soon to be released inmate to one of our District Committee Members (DCM's) by their (the inmate) home town information.

Remember, it is not intended that you become their sponsor, even temporarily, and is best if the word sponsor is not used in any way. "Pre-release Contacts" are simply connections to the A.A. Community.

The ultimate success of this program relies on our District Committee Members to explain to the General Service Representatives (GSR's) and interested members of this type of service; contacting the inside A.A. Member by letter within two weeks of being matched, and remain in touch with them as their release date approaches.

If you are willing to be the hand of A.A., 'when anyone reaches out for help' on the "inside" to the "outside", please contact us at the address listed below, or ask your DCM for more information. Thank you for your commitment in helping our fellow A.A.'s on the inside. 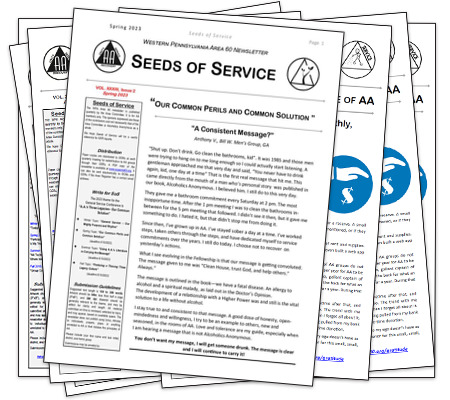 Once you confirm your email address you will be good to go -- we'll send you an email once a quarter with the latest Seeds of Service. Have a wonderful and sober day!

We'll Send you the Latest Issue for FREE

Join our email list and we will send you the latest Seeds of Service Newsletter each quarter.